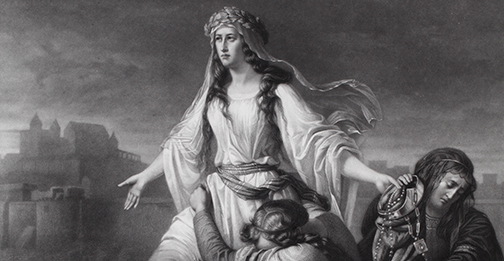 The exhibition presents prints illustrating the history of Poland from the 19th century, a time when historical themes became quite popular following the country's loss of independence. The exhibits come from various arts centres in Warsaw, Kraków and Lviv, with some that were made in Germany and France. The majority of works are prints that reproduce painting patterns using a variety of techniques, mainly lithography. One valuable example is a print which is a reproduction of the monumental Baroque painting from the Żółkiew parish church, which depicts John III Sobieski's victory in the Battle of Vienna. The largest group of works includes 16 prints made in Lviv by Marcin Jabłoński. They document the interior design of the historical chamber in the Palace of the Kraków Bishops, commissioned by Jan Paweł Woronicz and made by Michał Stachowicz in the early 19th century. Through these works we can explore the history of the Polish nation from the migration of the legendary Sarmatians until the creation of Congress Poland in 1815. The prints published by the Fine Arts Society present a particularly high level of artistic quality. The society was established in the mid-19th century and has been active in Kraków and Warsaw and used to provide its members with the reproduction of a selected painting every year. One of these can be viewed as part of the exhibition: a mezzotint reproduction of Maksymilian Piotrowski's 1859 painting depicting the legendary Wanda, a figure that inspired many literature and art works of the period. The exhibition also includes reproductions of works by other well-known artists who used historical themes such as Leopold Leoffler, Aleksander Lesser, Józef Simmler and Jan Matejko. Besides the major events of the past, their paintings also depicted scenes related to the veneration of national heroes.

EXHIBITION VERNISSAGE: 27 APRIL 2017 AT 6 PM
THE MUSEUM OF HENRYK SIENKIEWICZ IN OBLEGOREK