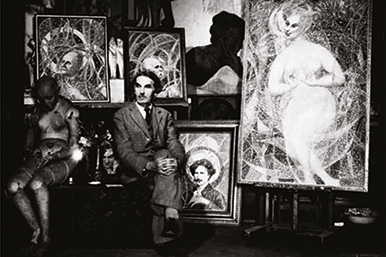 Bolesław Biegas (1877–1954) is considered one of the most original Polish artists of the first half of the 20th century. In his work, he was indifferent to the art movements and trends of the time, staying true to his own visions of painting. He is the author of spherical portraits,
he was involved in scandals and he was not understood by the society. Critics considered him as a politically involved symbolist whose artistic achievements could be summarised in
a couple of painting series. He was born into a poor family in Masovia; however, thanks to his talent and patrons, including Aleksander Świętochowski, he spent most of his artistic life in Paris. The exhibition entitled “Bolesław Biegas. Where Art Meets Politics” presents his two famous painting series, i.e. Wampiry wojny (The War Vampires) and Politycy (The Politicians), as well as other paintings, including Biegas’ early work - Wojna rosyjsko-japońska (The Russo-Japanese War). In 1907, the erotic and political significance of the work resulted in its removal from the Salon des Indépendants in Paris. The War Vampires is a collection whose main theme is the allegory of the eternal fight between humans and evil forces in which vampires are always portrayed as women and men become their victims.
The Politicians is a series presenting the key political figures, primarily from the first half of the 20th century, including: Winston Churchill, Charles de Gaulle, Franklin Delano Roosevelt, Adolf Hitler and Benito Mussolini. In both series, the background is the aforementioned celestial sphere that gives the paintings a universal character. From 3 July to 15 September visitors to the Museum for Intercultural Dialogue can see 32 of the artist’s works.