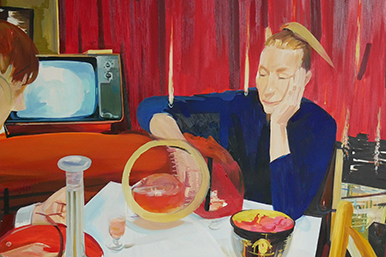 From 5 October to 6 November 2018 the Museum for Intercultural Dialogue will host the temporary exhibition: United States. Grzegorz Drozd's Paintings. The selection of paintings under the title United States is an invitation to become acquainted with Grzegorz Drozd’s artworks. The exhibition is aimed at breaking down the conventions based on linear narration, formal discipline and a clear-cut story. Grzegorz Drozd's painting technique is a form of performance art, one crowned by his paintings.

By assumption, his artworks are not focused on presenting the motive, but on seeking it throughout the entire process of creation. The title and ambiguous reference, United States, should therefore be embraced without reference to the country located on the other edge of the ocean, but instead as the artist’s internal journey into the depth of his own imagination. It is a search for those unknown and untitled areas that he has attempted to combine. His artworks raise essential questions about whether the language, form and creative process are still of the utmost importance.

In 1992–1995, he studied at the Artistic Faculty at the University of Maria Curie-Skłodowska in Lublin. In 2007, he graduated from the Faculty of Painting and Sculpture of the Academy of Fine Arts in Warsaw. He is a three-time scholarship recipient from the Minister of Culture and National Heritage, and a co-founder of Zmiana Organizacji Ruchu (Change in the Traffic System) project.  He has taken part in several artist-in-residence-programs, including tenures in Prague and Budapest. His individual exhibitions have been presented at the Centre for Contemporary Art at Ujazdowski Castle and at the Centre of Polish Sculpture in Orońsko. He has taken part in numerous group exhibitions in Poland and abroad – at Kraków’s MOCAK; the “Znaki Czasu” (Signs of the Times) Centre of Contemporary Art in Toruń; Waterside Contemporary in London; Gare Sauveur in Lille, France; and BACC in Bangkok, Thailand.