The Museum - its history and current state

The Museum is located in the part of the school building which history started during the reign of Augustus II. Here, in the years 1874-1886 the biggest writer of our region - Stefan Żeromski- was studying.

In the spring 1724 in the Cracow Suburb, close to the Saint Trinity church, the school was started to build. Initiator of that action was Cracow bishop Konstanty Felicjan Szaniawski. First students started their education there on 4th September 1727. The school was run by priests from „Communis Vitae” Institute. History of Poland had huge influence on the school activity. There were some changes in its names as well as in the education scheme. In 1962 the school was moved to the new premises in 15 Ściegienny Street and has been active till the present day. Nowadays it is called by its the most famous student - Stefan Żeromski. A lot of well-known people were studying there, including Piotr Ściegienny, Alfons Grotowski (an engineer, co-author of water supply system in Warsaw), Adolf Dygasiński, Roman Plenkiewicz (an educator, literature historian, editor-in-chief of „Przegląd Pedagogiczny”), Walery Przyborowski, Aleksander Głowacki (Bolesław Prus), Władysłąw Gajkiewicz (an MD, editor-in-chief of „Gazeta Lekarska"), Stanisław Sienicki (editor-in-chief of „Gazeta Kielecka”), Bolesław Markowski (undersecretary of treasury), Felicjan Sławoj-Składkowski (the last prime minister in the interwar period), Stanisław Niesiołowski (a painter), Julian Greek (undersecretary of heavy industry), Hieronim Wiatr (Oxford professor), Hugo Moryciński (theatre director in Kielce and Bydgoszcz), Gustaw Herling-Grudziński, Józef Ozga-Michalski, Jerzy Korey-Krzeczowski, Wiesław Jażdżyński, Marian Sołtysiak „Barabasz”.

When the school was moved to the new location, old, needing renovation building  did not have any use then. As the anniversary of the Stefan Żeromski's 100th birthday  was coming, Alekasndra Dobrowolska, a curator in the Świętokrzyskie Museum, suggested creating literary museum in that place. She had already had some experience in organizing exhibitions devoted to famous writers -  Henryk Sienkiewicz , Jan Kochanowski and Stefan Żeromski. Preparations and purchase of exhibits lasted till 28th June 1965. Since that time former school building has been full of life. 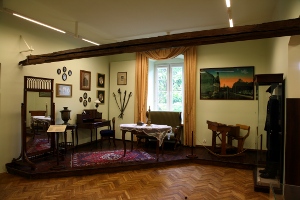 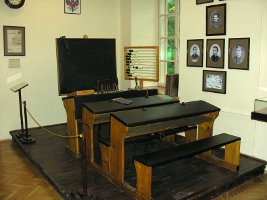 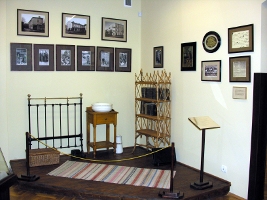