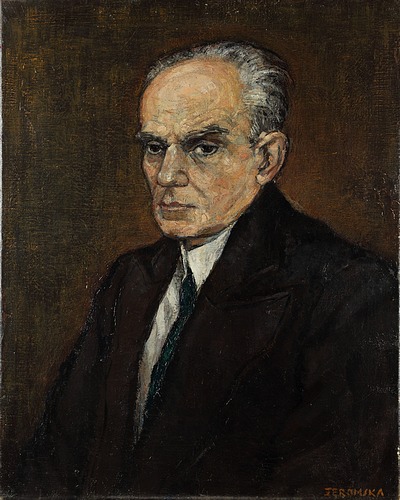 Stefan Żeromski was born in Strawczyn in Świętokrzyskie Province, on 14 October 1864, into an impoverished noble family.

His father, Wincenty Żeromski and his mother Jozefa of Katerl were leaseholders then. In 1865 they left Strawczyn and lived in Wola Kopcowa and Krajno – villages near Kielce. Finally, in 1869, they settled in Ciekoty. In 1873 and 1874 Stefan Żeromski attended a primary school in Psary, near Bodzentyn, and from 1874 to 1886 - the State Secondary School for Boys in Kielce. During his stay in Kielce he wrote his first attempts in poetry and prose, which were assessed by his teacher Antoni Gustaw Bem. The young writer had to face his mother’s death in 1879, followed by his father’s - in 1883.

After graduation – without taking his final exams however – in 1886, Żeromski left for Warsaw, where he started studying in Veterinary School. Since he had no money to live by, he began working as a tutor in Szulmierz, Oleśnica, and Łysów. In 1890 he arrived to Nałęczów to take up the post. There he met Oktawia Rodkiewiczowa, and they got married in 1892 in Policzna. From 1892 to 1896 the writer travelled to Cracow, Vienna, Zurich, spent some time in Zakopane, where he contributed to founding Zakopane Pubilc Library, finally he worked for the Polish National Museum in Rappersville.

Having come back to Poland in 1897, Żeromski was employed in Biblioteka Ordynacji Zamojskich (Zamojski Library) in Warsaw. In 1899 his son Adam was born. In 1902 the writer visited Italy. After that, he played an important role in organising People’s University in Nałęczów. There he also became involved in constructing ”The Hut” designed by Stanisław Koszyc-Witkiewicz (1905), and was appointed an honorary chairman for the “Light” society (1906).

In years from 1907 to 1911 the Żeromski family moved several times – the writer travelled a lot, to places such as Italy and France. Then his life changed even more drastically: he met a young artist Anna Zawadzka, who soon became his partner, and gave birth to their daughter – Monika in 1913, in Florence. In 1914 and 1915 Żeromski twice – and unsuccessfully – tried to join Polish Legions. In 1915 he worked for Supreme Zakopane Committee and became a board member of the Public Library in Zakopane. Unfortunately, in July 1918 his son Adam died.

In the same year Żeromski was appointed a leader of National Organisation and the President of Zakopane Republic (from 30 October to 16 November 1918). Next year his memories about Adam Żeromski were published. The writer worked for Polish Country Lovers’ Association in Zakopane. In 1920 he actively took part in the plebiscite in Warmia and Mazury and his family settled in a new house – “The Dawn” villa in Konstancin.

From 1920 to 1924 many efforts were made to propose Żeromski to Nobel Prize, unfortunately - with no success. In 1924 he was offered an honorary membership in the Pen Club, as a result of which he started organising its Polish division, finally established in spring 1925. Late in autumn 1924 the writer’s family moved to a flat in the Royal Castle in Warsaw. His health was seriously deteriorating then. Stefan Żeromski died there on 20 November 1925.